I first met Katy and Andy when I performed at Katy’s Sister Caroline’s wedding to Liam. That was a lovely wedding for a wonderful family and they booked me to be with them for the full day as Master of Ceremonies, to Uplight the Grand Hall at beautiful Middleton Lodge and of course to DJ for their evening function.

Katy’s first e-mail to me mentioned that they couldn’t imagine anyone else doing their Wedding – something which really touched me. Katy and Andy also chose Middleton Hall for their Winter ‘Snow Queen Inspired’ Wedding. They booked me to provide music for their Ceremony, to be their Master of Ceremonies for the day, to Uplight the Grand Hall in their chosen blue, to design and project customised animated monograms and to DJ for the evening, along with a white starlight dancefloor.

I met up with the Couple several times in the 2 years of preparation and got to know them very well. Both very laid back it was clear they had built a team of professional suppliers around them and trusted those suppliers to do their jobs. Although they had definite ideas as to how they wanted the day to go and in terms of their theme they were also open to ideas and suggestions. Working with them was an absolute pleasure. It was also fantastic to learn that many of the other suppliers they had selected were people I had worked with on numerous occasions before and both respect and admire. This always leads to some great teamwork on the day. The photographer was the amazing David West and videography by the lovely Chris and Janet of One Digital Image.  Make-up was done by the talented Amanda Bell

On the Day itself I was up at 5.30am to get loaded and for us to travel up to Middleton Hall which is just 13 miles from Berwick. We arrived just before 9am and installed the Uplighting and sound equipment. For daytime functions I generally use a white system which blends in with the decor of a room set for a wedding far better than ‘big black gear’ tends to.

Being a Northumberland Wedding so close to the Scottish Border and with Andy’s family being Scottish the couple had booked a Piper to pipe the guests into the building with traditional Scots Bagpipes.

The Ceremony itself took place in front of the gorgeous stone fireplace. Katy looked amazing as she walked down the lovely staircase to the tune of DJ Sammy’s Heaven (Candlelight Mix). Andy was visibly emotional as he saw his beautiful bride enter the room. Their Ceremony was beautiful with vows they had written themselves, 2 wonderful readings from their lovely 8 year old Niece Sophie (the 2nd of which she had written herself!) and a really nice touch was the sealed wine and love letter ceremony. Whilst the couple signed the Register and had some photos taken they had chosen some songs by the Vitamin String Quartet to play – covers of Coldplay’s Viva La Vida, Oasis’ Whatever and The Verve’s Bittersweet Symphony. Following the Ceremony the Couple made their exit to Adam Sandler’s Grow Old With You (obviously without all the talking at the beginning!)

After the Ceremony the guests made their way upstairs for a drinks and canapés reception to the accompaniment of the traditional bagpipes. Now time for the Middleton Hall team to prepare the room for the Wedding Breakfast and for us to install the equipment to project the first of their custom Wedding Monograms. By using a powerful professional projector to project the monogram the length of the room we didnt need to install any additional stands – the projector mounted directly to my DJ Booth. The room looked fantastic with chair covers with blue sashes, the blue uplighting, gorgeous table centrepieces. The Monogram was projected so it would be seen as guests enter the room via the staircase

This shows how my setup blends nicely into the room as the projector is not intrusive. The Moodlighting complements Katy’s lovely winter theme and having the room lights on keeps the atmosphere warm.

For their daytime Wedding Monogram we projected a design with static lettering of their names and date with a moving backdrop of slowly falling snowflakes. This ensured that whilst the WOW! factor was high, the animations weren’t distracting during the Wedding Breakfast and Speeches.

When Katy and Andy were ready, photographers in place and video cameras rolling I read out a short piece I had written for the Couple using information they had supplied me. It’s a great way to involve guests and make them feel special and included by sharing some information – often humorous. Often, guests hear something they didn’t know! It only needs to be short – I suggest 2-3 minutes at maximum but is a way to make the occasional both personal and unique. At the end of this I asked guests to stand and Katy and Andy came down the staircase to tumultuous applause, shouts of encouragement and even a wolf whistle!! A lovely moment and the enthusiasm showed just how close this family really is.

Once Katy and Andy were sat it was time for the speeches and I introduced Katy’s Father Alan who, as is tradition, made the first speech which was very well received. This was followed by Andy who, as Groom made his speech. It was emotional, very much from the heart and he received a lot of support and encouragement from their fantastic guests. Best Man Liam’s speech was to follow and he had everyone in laughter with his words, and with the selection of Scottish style undergarments he claimed to have found amongst the Wedding Party’s rooms. Then it was on with the food and during the Wedding Breakfast I played a wide selection of music including some Christmas songs as requested by Katy. It was a lovely atmosphere!

Food over, it was time for coffee and mince pies to be served upstairs so I asked everyone to take their drinks and move to the relevant area. this also gave time for the Middleton Hall team to clear and turn the room around for the evening function, for us to set up the lights for the disco and for the photo booth and dancefloor guys to get in. There was a minor panic when a phone call from the dancefloor team to say their vehicle had broken down just 15 miles away got my heart pounding but they had another vehicle on the job to make sure it turned up.

All ready for the First Dance, a rare photo showing both the room and ‘behind the scenes’.

You can see how neat all the cabling was, too!

Katy and Andy’s First Dance was to Bon Jovi’s Always, with guests joining in half way through which is perfect as the song is quite a long one. Over the course of the night people danced, they drank, they were definitely merry. The Photo Booth did a roaring trade and it was generally a lovely night.

For me though – the way you end a wedding is the difference between a good night and a great one. I spend time with clients discussing the best ways to end and sharing some ideas (which I wont share here!) to finish the night using the incredible emotion in the room to create some incredible memories. For a largely Scottish Wedding there is no finer end than everyone around the Bride and Groom to the tune of Runrig’s Loch Lomond. At the bottom of the page is a video showing some of the action though it doesn’t include my closing words and the massive applause for the new Mr and Mrs Hunter-McNab!

Below are a few photos taken during Katy and Andy’s Wedding along with a short video showing the 2 different Wedding Monograms we projected. At the very end is a link to the YouTube video taken at the end of the night.

Thank you again to Katy and Andy for having me as part of their Wedding Day. I’ve felt welcomed by their family for several years now and this wedding was an absolute pleasure to be a part of.

Video of the Monogram during the day and Evening 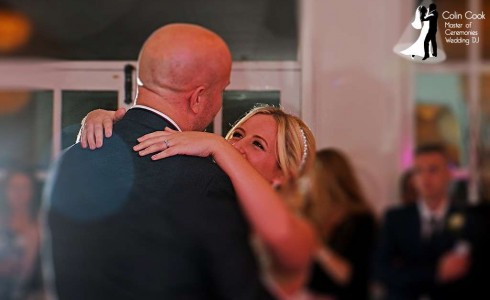 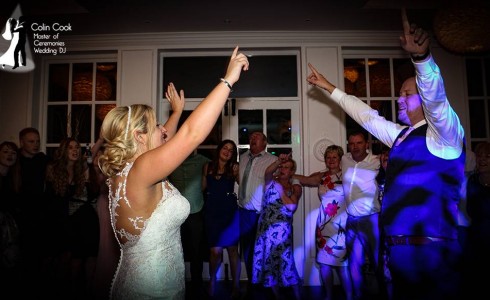 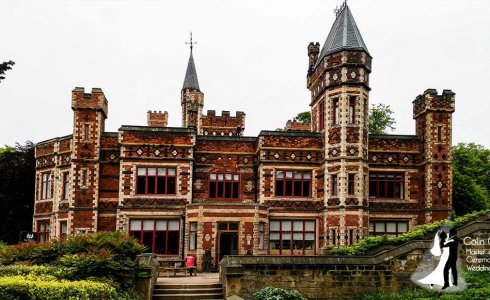 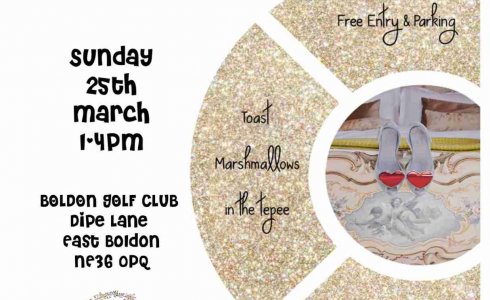 The Not So Average Wedding Fair 25th March 2018 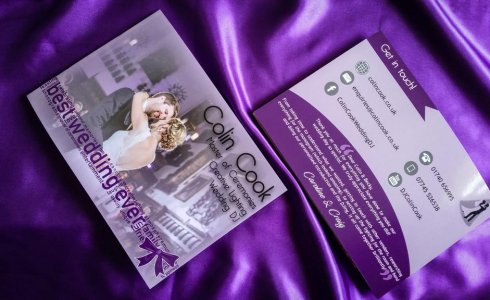